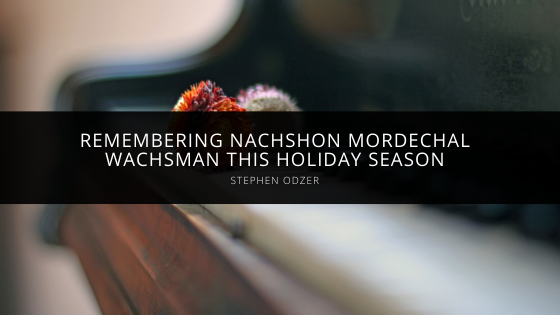 During the season to give thanks, Stephen Odzer is thankful for his family. “I have seven children and nine grandchildren. I also have a lot of family in Israel,” Stephen Odzer says. He is close to his immediate and extended family, and everyone shares the good and the bad times. This year, Stephen Odzer and his family honored his cousin, Nachshon Mordechal Wachsman, on the 25th anniversary of his death and kidnapping.

Although his cousin lived far away in Israel, Stephen Odzer and Nachshon visited each other for ten years. “We were buddies,” said Stephen Odzer. Since they were so close, his kidnapping and death was a shock. “We had asked Hashem for Nachshon’s safe release from his captors,” Stephen said. Unfortunately, the rescue mission didn’t go as planned. The Hamas, who had captured Nachshon, demanded 200 Arab prisoners were released to make the exchange. During the failed rescue attempt, two other Israeli soldiers died.

The void Nachshon left in all of their lives will never be able to get filled. To honor his lost family member, Stephen Odzer named his son Nachshon. Two other children also were named Nachshon and a Hebrew middle name. “In Israel, you can’t just name a son Nachshon Wachsman. It’s too painful,” says Stephen Odzer. Aside from children honoring Nachshon by naming their children after him, the family took other steps. They named an educational center in Jerusalem for children with special needs after Nachshon.

Four years after his death, Stephen Odzer organized a memorial service in Woodmere. Over 400 members of the Jewish Woodmere community attended. Among those who gathered the list included visiting family and local politicians. Nachshon’s mother, Esther, attended the Woodmere memorial service. At the ceremony, Esther said of her son, “He has become a symbol for everyone’s brother, sister, and friend.” Esther also said the memorial ceremonies “make my son’s life and death meaningful.”

For Stephen Odzer, the attendance of Esther meant a lot to him. Families have to stay united, especially in those tough moments when they need each other. Attending events in the memory of her son give her strength and comfort. “My son will have no descendants. It is these life-giving endeavors that perpetuate his memory,” Esther said.

Even though it has been 25 years since Nachson’s untimely death, the family will have him present in their hearts this holiday season.