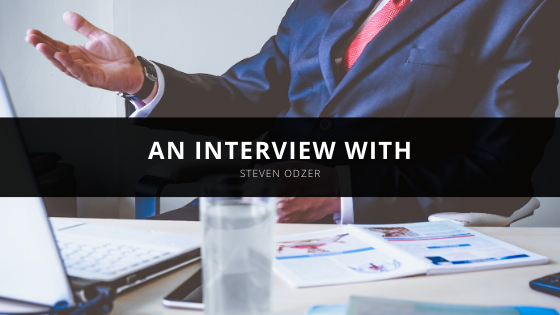 Stephen Odzer has been a successful American entrepreneur throughout his life. Since turning 18, Stephen has worked hard to create, develop, and successfully lead businesses in the distribution industry, leading to being named the Ernst & Young Entrepreneur in 2000. With over 30 years of experience under his belt, Stephen currently is the CEO of YBT Industries where he looks to transform the distribution landscape.

Stephen Odzer grew up in Brooklyn, New York. He went to Yeshiva of Flatbush High School and then he took the Brooklyn College Scholars Program. At the age of 18, Odzer went into the paper goods business and started his first company out of his parents’ basement. In 2000, Odzer was named the Ernst and Young Entrepreneur of the Year in distribution. He sold his first company to his largest competitor, Burke Supplies, in 2006.

Stephen Odzer is the founder and CEO of YBT Industries of Henderson, NV.

I leave my house by 5 a.m. I go pray by 7 a.m. and then I work until about 7 p.m. Then I go home to my two youngest kids and my wife. I have seven kids. I’m very involved with the local hockey team, the Vegas Golden Knights. I’m also very involved with my grandchildren. I’m very excited to say that my 10th grandchild will be born soon.

As Babe Ruth said, “Never let the fear of striking out keep you from playing the game.” That’s our mantra at work. No one ever made a shot they didn’t take.

When we started, I started out of my parents’ basement. Today, we’re a national distributor with locations throughout the country.

My father always taught me to hang out with very successful people. So two of my partners are billionaires, and I’m very active with the Republic Jewish coalition. I just joined up with the Economic Club, which is a meeting of world business leaders. I get my inspiration from other successful people.

My family keeps me grounded. As much as I want to work 24 hours a day, I’m always excited to go home to my family. I’m very involved in my seven children and ten grandchildren’s lives. I’m also close with my extended family.

That would be dealing with people who have ill intentions. I guess I just wanted to conquer the world. So the biggest obstacle is that you have to pace yourself because that can’t happen overnight.

My seven kids and my ten grandkids.

I’ve learned never to despair. Always do the work, be optimistic and relentless. In life, you dictate your future. If you work hard and you focus on what’s important, you can overcome almost any challenge.

My family and religious values. I live for my children. Anyone who talks to me knows I can’t go five minutes without bringing up my kids, I’m also very religious and am regularly involved in our community

I see my company as a recognized national distributor of our supplies. I see myself slowing down and spending more time with my family while continuing to be the visionary at my company.

I would say that it was when I was named the Ernst and Young Entrepreneur of the Year. I was recognized as a leader in my industry and I was competing with some of the world’s most successful entrepreneurs, some of whom I had always looked up to.